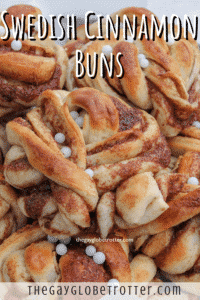 Swedish cinnamon buns (kanelbullar) are a staple pastry made with sweet pastry, a cinnamon cardamom filling, then baked until golden and flaky.

njoy Swedish cinnamon rolls alongside a coffee or hot chocolate for an easy treat that you will want to enjoy all year long! 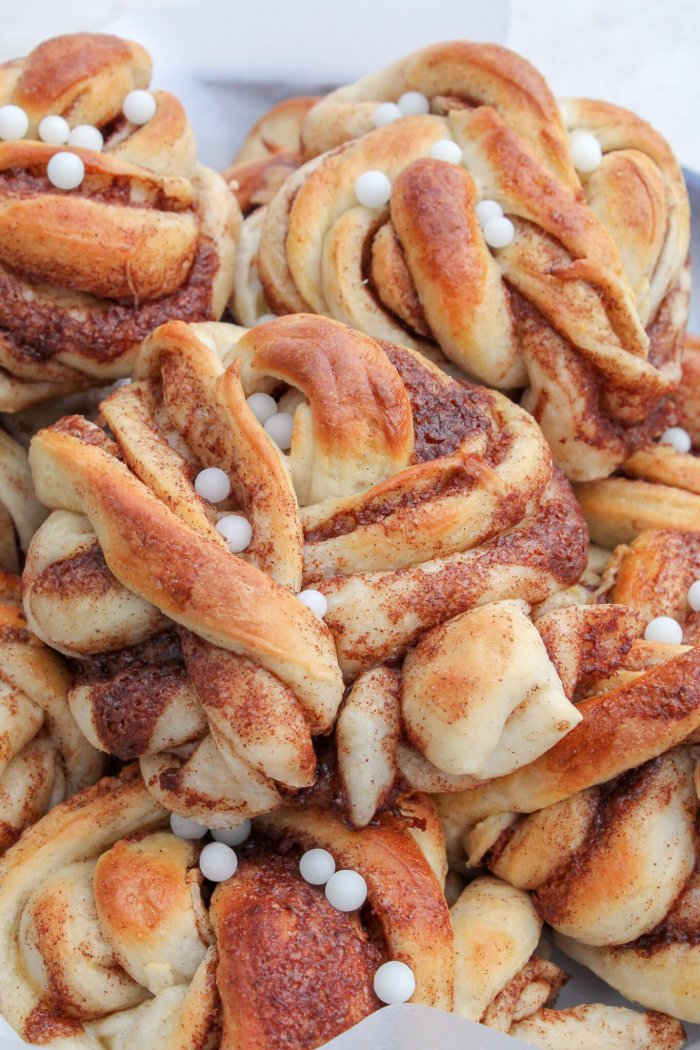 What Are Swedish Cinnamon Buns?

Swedish cinnamon buns are very different from the standard cinnamon rolls you’re used to at home, the main difference being the addition of cardamom to the cinnamon bun dough and filling. Cardamom has a strong flavor, and is a little bit spicy, creating a cinnamon roll that isn’t as classically sweet as its American counterpart.

Swedish cinnamon rolls also don’t have icing. Instead, you will find pearl sugar, icing sugar, or even slivered almonds on top of a traditional kanelbullar. I had a bit of trouble finding pearl sugar at a standard grocery store. Ikea, most baking stores, and even some craft stores will carry them. Alternatively, crush up some sugar cubes with the bottom of a cup to achieve the same results. 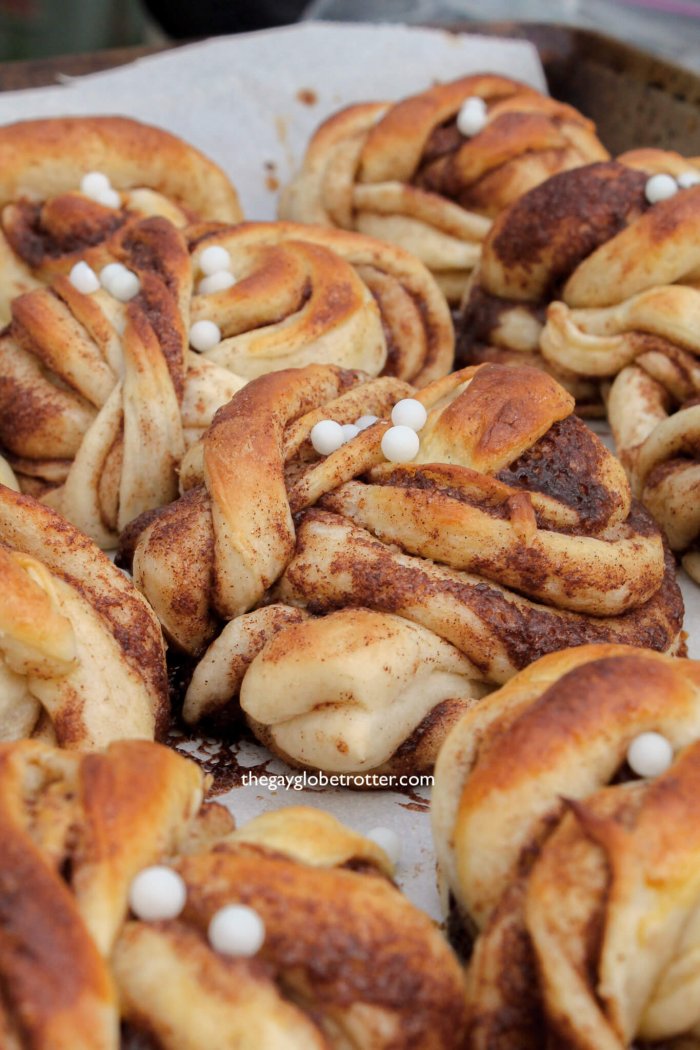 When I was in Stockholm, I learned about my new favorite time of day – fika. Fika is a Swedish tradition involving breaking from your day to socialize over a coffee and Swedish pastries. Swedish cinnamon buns were definitely the most popular fika choice. On average, a Swedish person will enjoy 500 of these delicious rolls annually – that’s more than one a day!

Fika is considered a way of life in Sweden, and it is a respected time of day to escape life and be in the ‘now’ with those around you during a coffee and bite to eat. I got to enjoy fika at my favorite cafe in Stockholm –  Chokoladkoppen. During my tour of gay Stockholm, I learned that this cafe was the first to ever fly the pride flag in Stockholm. I thought that was pretty cool! 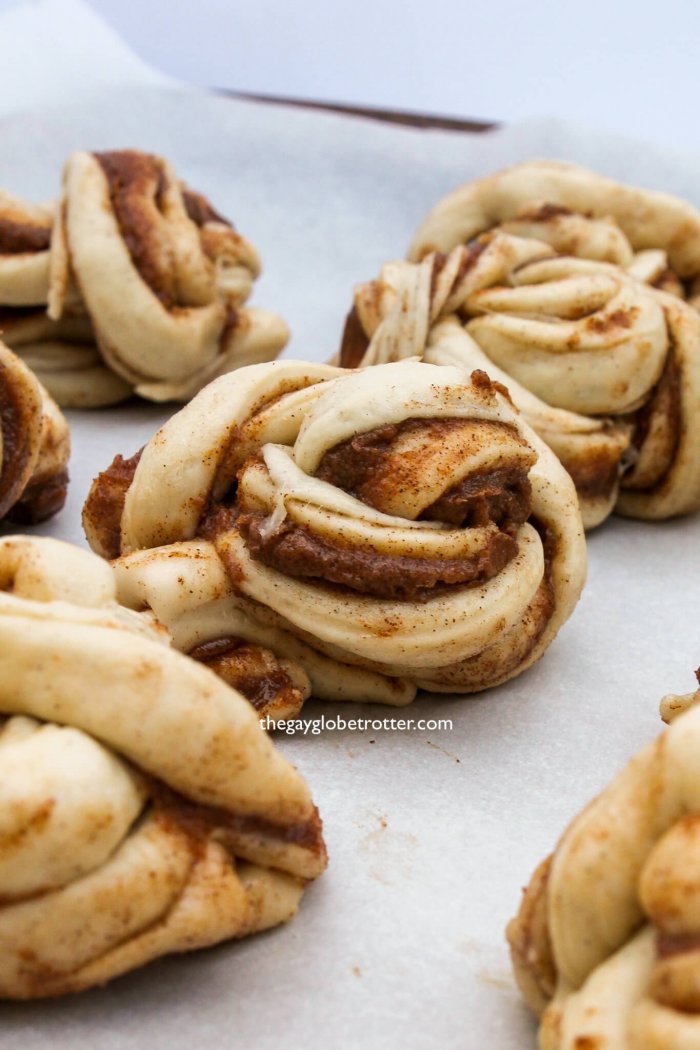 How To Make Cinnamon Buns

Swedish cinnamon buns aren’t a standard coil shape, they’re so much prettier and not all that difficult! Once you have everything together, roll the dough out on a floured surface into a rectangle, about 15”x24”. Spread the filling evenly over the dough. 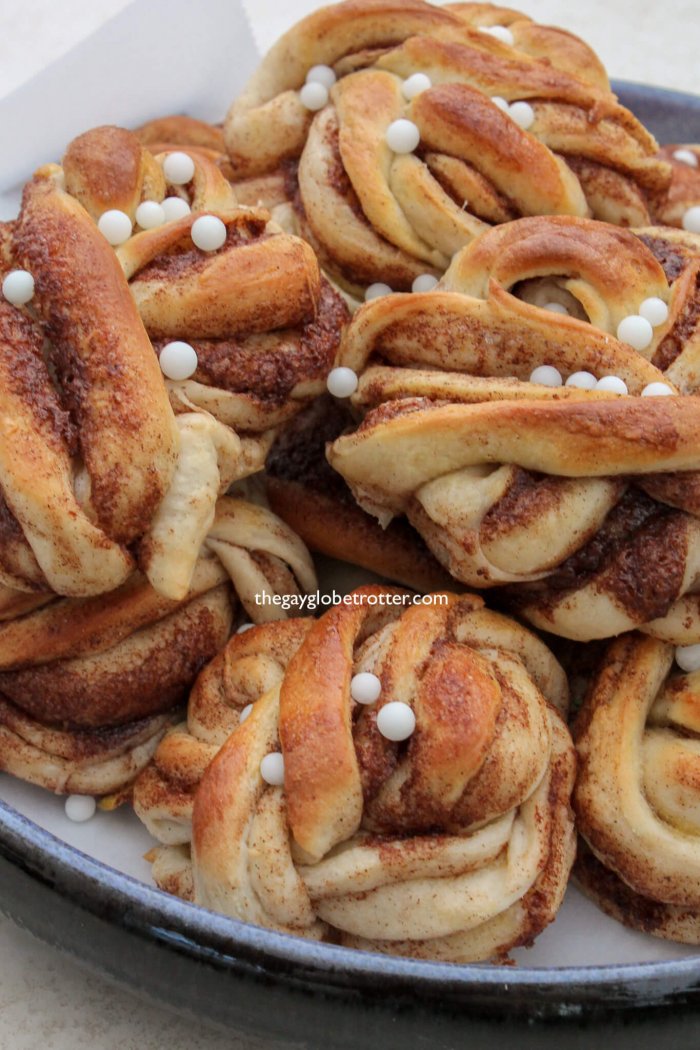 It took me a couple practice tries, but it is really a lot simpler than it sounds to make these. If you can tie a shoe, you can create Swedish cinnamon buns. Here’s a video to help you with the visual side of making these gooey cinnamon buns.

Because the dough is knotted, Swedish cinnamon buns bake at a higher temperature for a lower amount of time. I like to top mine with egg wash to help the pearl sugar stick and to ensure they brown evenly.

Swedish cinnamon rolls will last about 5 days covered, but taste the best the day you make them. I like to make a batch and enjoy it over the course of about 3 days (you bet I can finish 16 of these beauties in 3 days!) 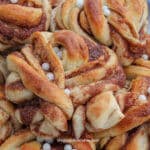 Rate this Recipe
5 from 7 votes

Tried this recipe? Let me know how you liked it below!

I would love it if you pinned this for later! 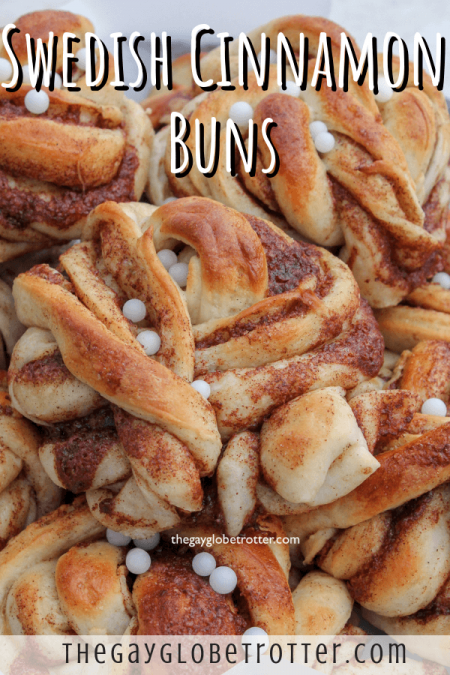